One of the joys of exploring Prague are the hundreds of accessible courtyards especially in the Old Town. The Platyz Courtyard is just one of them but of course, a courtyard just means it has a large building surrounding it which in this case is the Platyz Palace. On this post I’ll tell you something of it’s history and why you might like to visit.

You have to imagine that it’s the year 1347 and Charles IV is about to be crowned Holy Roman Emperor so the powerbase is changing. The Old Town is protected by a defensive wall that runs roughly from the riverside National Theatre, along past the bottom of Wenceslas Square, to Republic Square and then back to the river at Jerusalem Island. The exact location of Platyz Palace is on the Google Maps link.

1347 was the year when construction began. Prince Friedrich of Burgundy (a friend of the French educated and soon to be Emperor King Charles IV) acquires land right next to the defensive wall and adjacent to the Church of ST Martin in the Wall. Three houses that were on this plot were largely destroyed and the original Platyz Palace was built. That means it was a an early Gothic Palace with a single entry on the Old Town side where it meets Uhelny Trh (coal market).

For the next 200 years the palace remains largely unchanged and ownership passes from the Nobility to a Prague businessman called Jan Bradaty who owned it until 1586.

In 1586 the Platyz Palace was acquired by Jan Platejs (his name could also be spelled Platais, Plateis or Plateys). Although not Nobility, Jan Platejs was a powerful man and a secretary to Holy Roman Emperor Rudolf II. Platejs makes an architectural change and changes the original Gothic facade to Renaissance. At this point the building acquires it’s local Czech name i.e. the Platyz Palace.

This is the year when Platyz Palace returns to the Nobility when it is “acquired” by the Sternberg family. I say “acquired” because this is the time of the Thirty Years War and people who supported the Protestants were having their land seized and given to Catholic supporting families. The major change of the Sternberg ownership was after the destruction of the Old Town defensive wall so the Platyz Palace was extended and a new entry built on what was the New Town side of the wall. It was in this period that the building hosted a post office.

The last major change to the Platyz Palace was when it was owned by a Knight called Francis Daubek. He converted the palace to apartments and renovated the New Town entry into what you see today. The entry pictured at the top of this post is considered to be the main gateway to the Platyz Palace and it has a metal owl embedded into the left side of the archway. If you do the Prague City Walking Tour you’ll learn what it was used for.

For Tourists and Locals

The Platyz Palace is not the kind of palace that you buy a ticket to enter. As mentioned above, for more than 150 years it’s been converted to apartments but the courtyard shops include a cafe, optician, art supply shop, two restaurants (with outdoor seating) and a florist. So tourists are found here usually at the cafe or the Czech restaurant or else you’ll use it just to cut through between the Old and New Towns. There’s a little fountain in the courtyard which is used by locals for washing hands at the top and by dogs who drink from the base. If you are planning on a visit to the Church of ST Martin in the Wall then the the Platyz Palace is a mere 50 metres away. 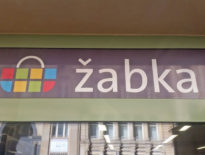 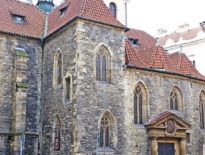