So you’re coming to Prague and intend spending a day in the Jewish Quarter. You’ll buy the Jewish Museum ticket and visit all the accessible synagogues right? Wrong! If you do that you’ll miss one because it’s not officially part of the Jewish Museum in Prague. It’s the newest, largest, cheapest to enter, most colourful and I think the most architecturally striking of all the synagogues in the city. Just 5 minutes walk from Wenceslas Square, it is the Jubilee Synagogue.

Where Does It Get The Name?

Strange name don’t you think and as it’s called “Jubilee” there must be some royal connection. In 1848 Franz Josef I succeeded his uncle Ferdinand V as Emperor of the Austro-Hungarian Empire. He would become the sixth longest serving European monarch in history and 1898 was the 50th (Golden) anniversary of him coming to power (fun fact – Franz Josef assumed the title King of Bohemia from his uncle but unlike his uncle, Franz Josef never had a coronation ceremony in Bohemia). On completion in 1906 the building was inaugurated and named in his honour as the Jubilee Synagogue. However, Czechs generally refer to it as the Jerusalemska Synagogue (the name of the street).

The Timeline of the Jubilee Synagogue

It’s Prague so it can’t just be a case of building a synagogue. There has to be a larger story. The fact that the building was going to be built was not driven by the anniversary as much as it was seen just as part of a wider redevelopment process.

In the early 1890s an urban reconstruction program began in Prague taking advantage of the new “Sanitation Law” to redevelop large areas of the city and of course to demolish hundreds of buildings deemed unhealthy. This included the Destruction of the Jewish Ghetto and three fairly large public synagogues in the Josefov, the Zigeuner Synagogue, the Great Court Synagogue and the New Synagogue. Jerusalemska was marked for redevelopment and the Jewish authorities acquired a building in the street. This was the site that was chosen to bring all three of the other synagogues under one roof (fun fact – Zigeuner or the short version Zigeun means Gypsy in German. The Zigeuner Synagogue was where Franz Kafka had his Bar-Mitzvah in 1896).

In European history the Moorish Revival period is largely the 1860-1890 period (the Spanish Synagogue is from the 1860s) so this was an extremely bold design for 1903 but it had precedent. The architect was Wilhelm Stiassny, an Austrian Jewish architect (actually he was born in Bratislava and is now considered to be Slovakian) and two things probably got him the contract. First because ten years earlier he had built the “Polish School” in Vienna (another Moorish Revival synagogue) and second, one of the synagogues to be demolished in 1906 was the Velkodvorska (the Great Court Synagogue) which in it’s last renovation in 1883 had been remade in the Moorish Revival style.

The Islamic theme begins on the facade of the building and there are two areas which include Hebrew text. The first is at the top (the highest blue part) “This is the gateway to the Lord – the righteous shall enter through it” (Psalm 118:20). The second is above the main entry arcade and reads “Have we not one Father? Did not one God create us?” (Malachi 2:10). This same text was repeated on either side of the main entry arcades in German and in Czech but these were torn down (German side in 1938 and Czech side in 1941). In the first picture below the German/Czech text is still missing. What you see in the second picture below is a restoral from 2019.

Islamic arches extend along the length of the Jubilee synagogue where they are used to support the first floor balconies. These balconies are for women who want to attend the services and are accessed via a side entry door. The balcony area also hosts a permanent exhibit of the reconstruction of various Jewish sites in Prague.

The Renovations of the Jubilee Synagogue

Like some other Jewish locations in the city during World War Two it was closed by Reinhard Heydrich in September 1941 and was used to store confiscated Jewish property which would later become the property of the Jewish Museum. During the communist era it remained open. It’s first renovation was in 1992 to restore the stained-glass windows. In 1996 the balcony prayer hall was restored. In 2001 the facade was restored. In 2002 they began the restoral of the interior walls, paintings and furnishings. It was during a building scan in 2003 that a secret cavity was revealed. This cavity contained a parchment going back to the very date of the inauguration in September 1906. In English it translates as:

This document was drawn up in commemoration of the successful completion of this building. It was signed by all those who were involved in the construction and, in the presence of many guests of honour, it was placed in the last stone of the building. May this temple survive many centuries and testify, even in the distant future, to the devout souls of its founders. May it fully serve its purpose for all time: to bring together worshippers in a place where they can uplift their souls to the Creator. May the Lord give! Done in Prague, on the 16th of September of 1906.

Parchment found during the 2003 renovation of the Jubilee Synagogue

When Was It Named?

Tough one to pin down. Officially the responsibility lay with the Society for the Construction of a New Temple but overall it was something called the Israelites Association of Prague that had the real power. It is not clear if this was something they were thinking about during the planning stage or whether it was discussion in 1906 as to how to make the best use of their new building. Either way, I guess currying some favour with the authorities wouldn’t hurt the cause. I lean towards this name coming up early in the process and was meant to align with the Golden Jubilee but by the time it opened it was only just over a year away from the Diamond Jubilee.

The Austro-Hungarians called it the Jubilee Synagogue, post 1918 the Czechs called it the Jerusalemska Synagogue and the Jewish community often referred to it as the Great Synagogue (named after one of the demolished synagogues). Since 1931 services have been held in Czech language. The building officially opened to the public on April 1st 2008.

NOTE: If you buy any Jewish Museum ticket which gives access to the Old/New Synagogue then you get a discount at the Jubilee Synagogue. This link to the Old/New, the fact that it remained open during communist rule and the fact that women are separated from men at services will give you clues to the religious origin of the Jubilee Synagogue i.e. it’s Orthodox. At the time of writing entry was CZK80 but reduces to CZK50 with the other ticket. The best way to describe how to walk here is to start at the bottom of Wenceslas Square. Walk up the square and turn left when you reach the tram line. Then walk until you reach the tower and take the next right. That’s Jerusalemska. 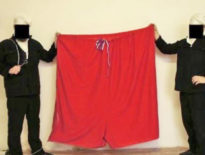 Politics and History A Pair of Red Shorts 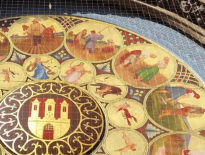