House at the Stone Bell – A Hidden Secret

You’ll read about the House at the Stone Bell in many guides and blogs. The same old bland rewriting of history will tell you it dates to the 13th Century and because of it’s location and decoration, was home to various noblemen. It’s not known exactly when it acquired the name House at the Stone Bell but best guess is the late 15th Century when unique building identifiers were becoming more common. And now for something more interesting.

It has been historically recorded that someone called Elizabeth of Bohemia stayed at the House at the Stone Bell briefly in 1619 with her husband. A few things to note here. Elizabeth was British! (Scottish) and we know her as Elizabeth Stuart, born in Dunfermline as the eldest daughter of James I, King of England. Part of the Gunpowder Plot was to kill James I and his son, kidnap her and make her become a puppet Catholic Queen of England. But it didn’t work out and she married Frederick V who became Holy Roman Emperor on November 4th 1619 but he lost the Thirty Years War which meant he had to go into exile and he died in Mainz, Germany.

Funnily enough, this post was written because I was gathering information about the Marian Column on the Old Town Square which was being rebuilt at the time. During that process it was surrounded by scaffold which had historical pictures of the square taken between 1915 and 1918 showing the column. The picture below was one of them and probably chosen because it shows the old column.

Most people will see a crowd of people around the old Marian Column and some historic features on the Old Town Square but my eye was drawn to the background and specifically to the corner in the shade because it answered two questions I’d been asking people for 20 years.

The large building on the left is the Kinsky Palace. In that shady part on the short side of the Kinsky Palace there is a sign above a window. This sign says “Herman Kafka”. If you know Franz Kafka then Herman was his father and he opened a Haberdashery shop in the Kinsky Palace in 1883. He was still working there when he died in 1931. I’d known that he had a shop there but not in which part of the building. This picture answered my question.

The next building (centre in the pictures) is in the sun with a Roman arch doorway. Above the doorway on this side of the building are 9 clearly visible windows in late Baroque style plus others in the shady side of the alleyway. It’s the House at the Stone Bell. Now look at the picture below to see what the building looks like now.

Compare the two pictures and specifically, the windows. What a shock! Most published guides tell you that the House at the Stone Bell is an old building in Gothic Architecture and it does look like an old Gothic building. What they forget to mention is that for 300 years (approximately 1685-1985) it had 1) a Baroque Facade, 2) FOUR floors and 3) a completely different roof. Again I knew that extensive work had been done on the building but I did not know what the building looked like before the 1980s so the picture answered my second question.

It’s one of the biggest surprises for me that in the hardest communist period i.e. the early 70s (and at the best of times the communists were not known for restoring historic buildings), a simple building renovation unveiled an historic building and the government spent 13 years and a lot of money to restore the House at the Stone Bell to it’s original form of Gothic facade/entry, Gothic roof and reconfigured back to 3 floors. The picture above shows some of that detail i.e. where the statues once stood and the original window frame and decoration. In 1988 the building was officially taken over by the City Gallery and it hosts temporary art exhibitions.

House at the Stone Bell 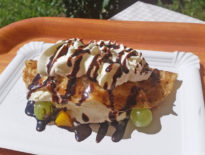 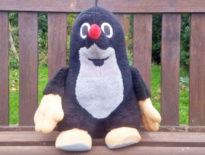