As you wander around the city you’ll pass various memorials to people and events. On the Old Town Square you’ll find the 1621 memorial. Actually you are more likely to walk over it first. It might look old but in reality it only goes back to renovation work done in 1911 for the cobbles and the plaque was added later. The story of the 1621 is part of my Old Town and Jewish Quarter Walking Tour.

If you’ve read the Prague Defenestrations post you’ll learn about how the Thirty Years War started. If you read the Thirty Years War post then you’ll know the Battle of White Mountain was fought on November 8th 1620 and decided whether Prague would be under Protestant or Catholic control. The Catholics won!

So we arrive at June 21st 1621 a little more than 7 months after the battle. More than 40 high-level supporters of the defeated protestant movement have been identified, charged and convicted of treason. Several would have been offered “exile or death”. Twenty seven noblemen (or insurgents if you like) were either not given the option or chose death.

The Parts of the Memorial

The Plaque – The bronze plaque on the wall of the Old Town Hall tower building identifies the 27 noblemen and their respective roles/positions. For example, a “Primator” would be a town mayor. A “Mestan” is a Burgher or what we might consider now to be a town councillor or advisor to the mayor.

The Cobbles – Looking at the floor you’ll find it is mostly black cobbles but built into it are now 27 white crosses (one for each nobleman) and the date of their deaths 21-IV-1621.

The picture is a wood-cut representation of the event but it raises several questions and leads me to believe that it was done by somebody who had never actually visited the Old Town Square. Here’s why.

1) The stage is separated and in front of the Old Town Hall main entry on the narrow side of the square. Historical documents show two of the noblemen were hanged from a beam which protruded from the Old Town Hall chapel above and they used a ladder from the stage so in the picture this should be on the far right and around the corner.
2) The main area of the square is off to the right side of the building where most of the crowd would have been and hence supports the idea of the executions being done around the corner where the plaque is located.
3) The picture shows a person kneeling on the stage in front of a crucifixion cross with a man standing behind him with a sword AND a separate chopping block on the edge of the stage. It was recorded that as Hussites (Protestants), they were forced to kneel at a symbol of the Catholic faith before being executed. If you have been sentenced to death I don’t think the threat of death would have been used.
4) The picture shows the joining of two buildings which is correct but there is a row of windows at the same level which is not correct.
5) The astronomical clock on the right of the building is shown below another clock. If this is supposed to be 1621 then the Orloj (Astronomical Clock with Calendarium underneath) is already in place so there would have been no other clock on this side.
6) Top right where you see a ladder going through a crowd. This is historically correct in that the mayor of the Old Town was hung from the criminal gallows on the square.

This is what I think is a more accurate picture on the correct side of the Old Town Hall with the beam from the chapel overhanging a stage and with a mix of military and civilian onlookers. Each of the 27 were given the opportunity to recant their crimes of treason. Whether they did or not is unclear but certainly it was not going to change their fate. Three of the 27 were hung and 21 were beheaded. The following two who were doctors at the Charles University, had their right arm cut off before being beheaded and finally Jan Jesensky, considered the leader and rector of the Charles University, had his tongue cut out, right arm cut off, beheaded, drawn and quartered and the parts hung on the city gates!! 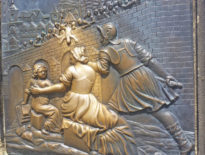 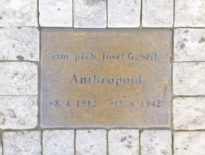