For those of us in our 50s who still remember INXS and have at least two CD copies of the album “Kick” then that period between 1987 and 1997 was pretty special. I remember watching the Never Tear Us Apart video on MTV in 1988 and I remember being in a hotel room in Hong Kong in 1997 when I heard Michael Hutchence had died aged 37. Music TV channels were running all the old videos and it was at then that I noticed that some of them had a Prague connection. TIP: Read First, then watch the associated video if you want.

After “Need You Tonight”, this was my favourite track on the KICK album. The video begins with a shot through a broken street lamp towards an old building and a policeman (with a white cap). The building is the Jewish Ceremonial Hall in Prague.

Then we cut to a river scene past some violin players and Michael Hutchence begins to sing. This is all filmed on Shooters Island and although the musicians are Czech, they would need to have been politically approved by the Communist city authorities before being allowed to play in the video.

There are various shots of Charles Bridge and the Lesser Town but pay attention that three different scenes in the video have a policeman in them. The scene that starts “I could live…for a thousand years” was the toughest one to locate and was filmed in the area called Little Venice. When the scene starts they walk out from underneath Charles Bridge and walk into the alley that leads you to the Lesser Town bridge tower. The scene was supposed to finish at the bollard, note the policeman marching towards them who is just about to say they cannot go any further. With all these pictures of the police INXS made a statement here that it was not possible for members of the public to interact with them and that the filming locations were heavily controlled. That’s why the police were there.

At the 2:35 marker there is a saxophone solo scene and we are back at the lamp post which began the video but this time looking back the other way. As the camera rises you see inside the Old Jewish Cemetery as the saxophone plays and Michael Hutchence walks between the graves. This area had a line of souvenir stalls and because of them, another fence was added to the cemetery. The video ends with a sliding shot of the Calendarium and the Old Town Square.

The funeral of Michael Hutchence was in Sydney at the ST Andrews Cathedral on November 27th 1997. At the end of the service his fellow band members helped carry the coffin accompanied by this song, Never Tear Us Apart.

WARNING: This video should not be viewed by people with epilepsy.

The video begins with a couple of scenes which finish looking up at a balcony with decorative lamps either side and overlooked by a large mosaic. This is filmed at the Municipal House in Prague on Republic Square. The video then cuts inside and you walk through a door. This takes you into what we call the “Sal Palackeho” or Palacky Hall which you can see if you do the Official Municipal House tour. That in turn leads you straight out onto the balcony that you saw at the beginning of the video and this is where the band plays throughout the video except for one small clip……

About a minute into the video there’s the line “sleep baby sleep… now that the night is over and the sun comes like a god… into our room”. In the video there’s a nine second supporting shot looking from a room through a window as it passes from night to day. Most people would miss the fact that you are looking at the top floors of the Rokoko Palace on Wenceslas Square.

But what is really crazy is that to get this specific view you would need to be on the other side of Wenceslas Square and further down the square. That puts you in the Grand Hotel Evropa which was actually where the band stayed during their time in Prague. So whether deliberate or by accident, filming was done which matched the exact lyrics of a specific part of the song. Was this shot ever supposed to be part of the video? maybe not but in the edit they realised they had the shot and matched it to the lyrics. Artistic.

It’s probably my least favourite track but I’ve included it because again it was shot in the Municipal House at Republic Square. In this case the entire video is shot in the same corridor.

So that’s it, you can find these places or if you want to hire me to show you around then feel free to contact me or take a look at livingpraguetours.com for different tour content. 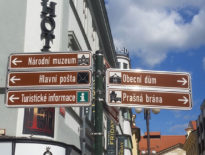 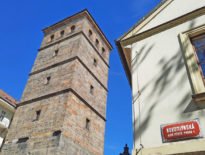