Linkin Park was in Prague in 2003 filming videos for their second album called Meteora released in the same year. When I first listened to the album it was a bootleg copy from a stall in Nathan Road, Hong Kong. I thought “Breaking the Habit” and “From the Inside” were going to be anthems but to end the album with “Numb” and then to find out that they’d been in Prague that summer filming videos, well this city is never boring. TIP: Read about the video first, then view it.

The iconic last track on the Meteora album. The video filmed in June 2003 starts with a shot of a girl on Charles Bridge looking in the direction of Manes Bridge. Then it cuts quickly through a city scene, a close-up of the ST Nicholas Church, back to the girl and then we cut to the band in a church. People have told me that when Linkin Park came to Prague, one of the filming locations was ST Vitus Cathedral and apparently there was filming done there. I say “apparently” because none of that film ever made it into the official video. The reason why was that the lead singer Chester Bennington was sick and not part of the original filming.

So when you see the shots of the band inside a church, these were filmed at the First Congregational Church in Koreatown, Los Angeles.

All of the shots of the girl in the school location were filmed at the Johannes Keppler Grammar School which is a 10 minute walk from ST Vitus Cathedral. At 00:24 we see a scene of the girl doing a drawing in class, her left forearm is exposed and the word “NUMB” is visible. There’s also a half-second shot at 02:06 where you see it again and a third scene at 02:15 was to have shown it but was cut short in the edit. The girl is American actress/dancer Briana Evigan who was 16 at the time the video was filmed.

I don’t know if it means anything but the statue that the girl draws is ST Ludmila, grandmother of “Good” King Wenceslas the Czech patron saint.

At the time of writing the official video had been viewed more than 1.6 Billion times.

Again it’s a track on the Meteora album from 2003 but not released as a single until 2004 and boy does this give me goose bumps. Strangely the video was NEVER released on any Linkin Park DVDs. The video is filmed in two locations. The rioting scenes are on the Loreta square (Loretanske Namesti) adjacent to the Loreta and Capuchin Monastery. The crowded street scenes are filmed in the 3rd District. Students from the Johannes Kepler Grammar School (used when filming the Numb video) also provided some of the extras in the street scenes.

The video begins with armoured personnel carriers turning into the street. This was filmed at the junction of Loretanska and Loretanske Namesti so if you were standing and facing the Loreta and you looked to your right up the hill, that’s the view. From the same place if you looked to your left you’ll see the arches where in the video is the wrecked car that gets turned over and all the fighting and rioting scenes were filmed here.

The scene then cuts to Chester Bennington walking along a street with crowds of people. These scenes were filmed in the 3rd District in a street called Rehorova. You see a small boy in a room with a glass of milk. The chorus begins and we switch back to the small boy as he walks down the stairs and emerges onto a street. The house used for this scene was Rehorova 16. We now see a couple more scenes with the boy, one has him walking close to a small park sheltered by trees. This was filmed at Kostnicke Namesti less than 200 metres from Rehorova. Basically they shut the roads Orebitska and Rehorova for these scenes in the video. Then it’s the boy at the back of some apartments crossing a little bridge. This was filmed at the rear of Rehorova 16 where it accesses a common apartment garden.

Then we go through a series of switches between the crowded street scene at Rehorova and the rioting scenes at Loretanske Namesti and as we settle on the rioting we see the boy is now here.

When the boy begins to scream you’ll notice somebody waving a white flag in the background. On the flag is a copy of the cover of Linkin Park’s first album “Hybrid Theory” from three years before. The boy creates a sonic boom that throws everyone on the floor. Then we switch back to the Rehorova location and a wobbling old streetlamp. It’s fake. They don’t have the old lighting at the junction of Rehorova and Orebitska in the 3rd district.

The video leads out with a series of shots of the band and the boy and by the way, the boy is the 7 year-old Jaime Bennington, the lead singer’s son. RIP Chester.

So that’s it, you can find these places or if you want to hire me to show you around then feel free to contact me or take a look at livingpraguetours.com for different tour content. 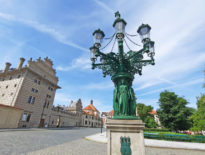 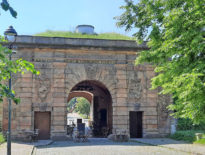