It’s a common question on the walking tours so I explain to people what is the difference between the red and blue plates on the buildings….apart from the colour.

Up until 1802 there was no structured address system in Prague. There were plot numbers so each parish could control who was building what and where but the identification of the building was largely down to local knowledge or for the older buildings, a unique identifier. A plot could have multiple buildings within it so if the plot was 1180 then each building was known as 1180-I, 1180-II, 1180-III etc so it was ok knowing the street but unless you knew the plot numbers, finding buildings was a problem and if someone divided the plot, a nightmare.

In 1802 the red plate started appearing. You have to remember that “Prague” as a city had only existed for the previous 25 years. Yes I know Prague is much older than that but previously it had been split into towns like the Old Town, New Town, Lesser Town and Castle areas. So these towns were only combined in the 1780s into what we know as the Prague 1 area today.

So from 1802 we get the centralised numbering. That means that each town and each parish within the town (loosely called a Cadastre) will have a unique number for every building. There are some variations on the plate depending on the version i.e. plates after 1922 will show a district number i.e. Prague 2, Prague 4 etc or it may just have a numeral 2 or 4 or Roman numerals I, II etc. We know the red plate as the “descriptive number” or something that defines individual buildings on the same plot. This is hugely important when buying property here.

In 1868 it got more complicated with the introduction of the blue plate. This seems to have been driven to get things ready for the National Census in 1869. That census clearly shows both new and old style addresses with plot numbers. By the next census of 1880 it was entirely the red/blue system. The city may also have planned this knowing that the Destruction of the Jewish Ghetto was being planned. The purpose of the blue plate was to identify the number of the building within the same street. We know the blue plate is called the “reference number“. Depending on who allocated the blue plates, usually you expect the odd numbers on one side of a street and the evens on the other but on roads bordering a square they are in line. From 1869 it meant that as the numbers are in order, finding the building was simple using the blue plate. 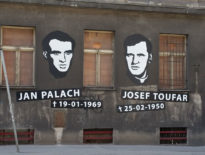 Politics and History Story of a Photograph 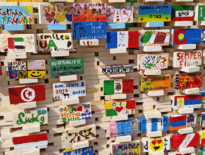