Tourists will flock to Prague Castle to see the Golden Lane and it’s little houses. But an equally pleasant street, although the houses are less accessible, can be found just a five minute walk from the Castle. In Czech it’s Nový Svět (you say it like know-vee svee-et) or in English we call it the New World.

A very grand name for a little street in the Hradčany district but historically the New World was an area and not part of Hradčany when it was first occupied around 1320. The original street ran alongside the Deer Moat and led from the castle to the next settled hamlet about a kilometre away called Strešovice. It was protected by the moat and was part-fortified by a wall in the reign of Charles IV @1360. As the Nový Svět expanded it reclaimed land from the Deer Moat and added the streets now called Kapučinska (named after the monastery) and Černinska (named after the Černin Palace). To access Nový Svět coming from the Castle you would have passed through a guarded gate (the army garrison barracks is still there and is used by the Castle Guard) next to where the ST John Nepomuk Church is today. This gate was only demolished in 1890.

Who Lived in Nový SvĚt

Initially it was made up of dwellings for people who worked for the Royal Court but who were not considered important enough to reside closer to the castle but the fortunes of Nový Svět and the people that lived there rose and fell with the years.

In the best of the years the kings and emperors stayed at Prague Castle and the busy little street was inhabited by royal courtiers. But when the kings and emperors had to retreat in time of war or if they ruled from Vienna then the fortunes of Nový Svět worsened to the point where it was pretty much destroyed three times either by war or fire. For long periods it was an area associated with prostitution until the late 19th Century. From the time of independence i.e. 1918, it became a centre for creativity and residents would have included famous architects, painters, directors and actors. Today it’s a pleasant cobbled street with semi-modernised houses and apartments.

In the 16th Century the fortified area of Prague Castle was extended out past the Deer Moat and introduced an additional buffer for security. In the 17th Century the authorities added the Baroque Fortifications and you cannot miss these at the west end of the road as they tower over you. TIP: Go up the steps and turn to the left where you’ll be able to look back down over Nový Svět and get the view pictured.

What Can You See Today in Nový Svet

Basically it’s a narrow street with an open-air theatre and playground behind the wall. Astronomy fans will stop at the first building in the street (No.1) and see where the famous astronomer Tycho Brahe stayed. Your only chance to see inside one of the old buildings is to go to the Zlata Hvězda (Golden Star) house pictured above which has been converted into a small cafe. If you go in you can see into their back courtyard as well.

There’s a house with a penny farthing bike over the door and it has a faded pair of shorts. You should read more about why sometimes you see a Pair of Red Shorts. If you are walking from the Castle end of the road then at the far end as you turn to walk uphill that will take you towards the Loreta and then to the Pohořolec Square where you’ll find cafes/WC. 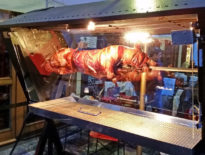 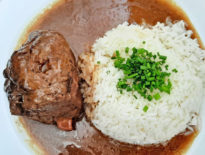