Time has always been important to the residents of Prague and they even have their own “Old Czech Time”. But long before pocket watches became fashionable people knew what time it was or at least they knew when it was noon. The Prague Meridian is an invisible line but it’s also marked in one special place. The text in the picture is in Czech and Latin but it translates as “the meridian according to which Prague time was controlled in the past”.

A Brief History of Time

Back in 1410 the Astronomical Clock provided the first public method of telling time but it was prone to failure and indeed spent much of it’s life not working.

A century later and the Klementinum Observatory Tower was built and another century after that (1852) the Klementinum took over the noon time calculation (it was a little less than 0.005 degrees or 1.6 seconds different from Marian Column time but few noticed). This time noon was announced by a bell and somebody waving a flag from the top of the Observatory.

It 1891 a cannon was placed along the Prague Meridian but on the other side of the river in Letna Park. This cannon would be fired when they saw the flag being waved on the Klementinum Observatory Tower. The cannon sounded until 1922.

In 1914 a place called Kramar’s Villa was constructed at the site of the noon-day cannon on the Prague Meridian and since then it has been the official residence of the Czech Premier (not the President).

In 1918 the Marian Column was torn down so it removed that method of telling the time but fortunately the Astronomical Clock was now quite accurate and people were already carrying watches. For years, you could only tell where the column used to be by a stone marker.

In 1990 during resurfacing work on the Old Town Square it was decided both to mark the original location of the Marian Column, change the line of cobbles to a granite/brass strip and add a Latin/Czech ground plate (pictured at the top). This is what you see today.

Actually what you see today is the new Prague Meridian connected back to the new Marian Column which was reconstructed in 2020 so allowing for daylight saving (and about 15 minutes of error) you can see the shadow of the column fall on the Prague Meridian just like in 1652. The Prague Meridian is included in the Old Town and Jewish Quarter Walking Tour. 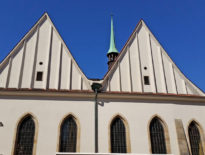 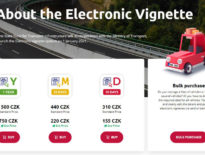