A trans-atlantic liner called the SS Patria sank on 25th November 1940 at the port of Haifa in what was then Palestine. You’re thinking what the hell as this got to do with Prague? Well for me it all started with a photo.

In 2015 I was preparing to start my Walking Tours business. I had a lot of knowledge about the city but I was looking for real detail and one of the things I was looking at were the Stolpersteine (WW2 memorial plaques) on the route of the tours. I took pictures of many of them and started researching for back stories. There were several interesting stories but this was one that stood out. This couple did what parents have to do.

The story starts with Adolf Eichmann. He had been based in Vienna and under his Office for Jewish Emigration he’d set up a system which meant that although Jewish people could leave their occupied countries they would have to relinquish everything they owned in the process. Eichmann enlists help from Berthold Storfer, a Jewish businessman from Vienna to assemble what turned out to be 3600 Jewish people who wanted to leave the cities of Prague, Vienna and Danzig (now Gdansk). Normally to emigrate required an entry visa for another country to be granted before you could get an exit visa but there was a political motive. Remember it’s World War Two and Great Britain still has a Colonial Empire which includes Palestine. So what better that to send 3600 Jewish people there and provoke an Arab revolt against the British army. So exit visas were granted and the 3600 made their way across Europe to the Romanian port of Tulcea.

Arriving at Tulcea, in September 1940 this group embarked on three Greek ships called the SS Atlantic, SS Pacific and SS Milos. And so we arrive at our Prague connection. One of the Jewish passengers on the SS Milos was none other than George Bohm, the 18 year old son of the couple whose plaques are pictured above. They had paid for him to travel and he was on his way to Palestine. On Palestine Police documentation relating to George Bohm it lists the following:

The 12,000 ton ocean going liner the SS Patria had been built in 1913 and was French owned. I don’t know if it’s relevant but in Latin Patria means “Homeland”. It had been used as a troopship in World War One and spent the next 20 years ferrying people and goods all over the world. In the summer of 1940 it had been moored in the Haifa Harbour when the Nazis occupied France and so the British impounded the ship.

By November 3rd 1940 the SS Milos and SS Pacific were moored in the port of Haifa awaiting the SS Atlantic which was due to arrive on the 24th. The British would not let allow them to enter the country fearing an Arab backlash and on November 20th issued a deportation order for the 3600 to begin transferring to the SS Patria to be taken to other British controlled colonies. This would require two return trips and was possible because although as a civilian ship it was restricted to carrying 805 passengers, the British changed it to be listed as a troopship which meant it could carry up to 1800 passengers. On November 24th the transfer of passengers from the Milos and Pacific began.

On November 22nd a bomb had been placed in the engine room of the empty ship but it failed to go off so another more powerful bomb was taken onboard. At 9am on November 25th 1940 the SS Patria had almost completed it’s loading and had 1770 passengers aboard mostly from the SS Milos and SS Pacific when the second bomb went off in it’s engine room blasting a hole in the hull of the ship. It sank in 16 minutes drowning 267 people, more than 200 of whom were Jewish.

At first it was thought that the passengers had in some way sunk the ship in a desperate attempt to stay in Palestine. This was not too far from the truth but it did not involve the passengers. The Jewish resistance group called Haganah admitted the responsibility of sinking the ship but they maintained that their aim was only to disable the engine and force the disembarkation to Haifa. Following the creation of Israel in 1948 the Haganah became the Israeli Defence Force. In 1957 a man called Munia Mandor admitted that he had placed the second bomb on the SS Patria.

I don’t know what happened to George Bohm but the year after he safely entered Palestine his parents were deported to the Jewish Ghetto at Lodz in Poland where they died. 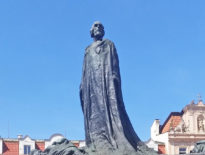 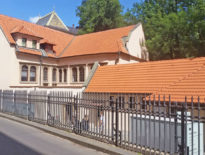