This post explores the detail on paintings numbered 1 to 5 in the Slav Epic series with interpretation, what to look for and historic context etc. If you want first to learn what leads up to the creation of the Slav Epic, who painted it, when and where it was painted, who owns it and where it is right now then check Slav Epic Part One.

Slav Epic Painting No.1: The Slavs in Their Original Homeland, Between the Turanian Knut and the Gothic sword (1912)

When Mucha refers to “orignal homeland” he is taking us back to 5th Century Europe to an area roughly between present-day Poland and Ukraine. The subtitle of the work “between the Gothic Sword and the Turanian Knut” refers to the tribal warfare of the time as from the west would come from broadsword carrying Teutonics and from the East the Eurasians with their Knut (a kind of whip).

Slav Epic Painting No.2: The Celebration of Svantovít, When Gods are at War (1912)

Up to the early 12th Century the Slavs had battled west into present-day Germany so had taken over the Jaslund peninsula and the island called Rugen. On this island was built a temple in honour of the pagan Slavic God Svantovit who was considered both as a god of war, fertility and of economic progress. This was destroyed by Danish Christian soldiers in 1168 so this could easily have been another of the “post-Battle” paintings but here Mucha expresses the Slavic wish for peace and celebration with the threat of war hanging over them. There are three parts to the picture.

Almost the entire base of the painting is full of people in white who are pilgrims making a journey to the temple to make offerings of protection and to ensure a successful harvest (note the Maypole in the light) plus the associated music and dancing. The second area is top-left and shows the Viking God Thor with a pack of wolves which signifies the coming destruction and gives the subtitle to the painting “when Gods are at war”.

The third part is central. On the left are three older Slavs in bondage marking a coming defeat. At the front of the group are three musicians leading the procession including a horse on which Svantovit is carrying a dead Slavic warrior. Look at the right arm of the warrior and you’ll see the arm of Svantovit holding him but there is the hilt of a sword in the hand. It appears that there is no sword until you see that the light is the sword.

The sword represents the hope that although the Slavs will be defeated in the coming battle, the Slavic glory will be restored. In a final touch Mucha adds the Linden Tree, symbol of long life which will become the national tree of Czech. Centre-bottom Mucha again adds the Mother and child accepting their fate with just a bit more hint of light than the surrounding area to remove it slightly from the scene.

Slav Epic Painting No.3: Introduction of the Slavonic Liturgy in Great Moravia, Praise God in his Native Language (1912)

Following a Century of German missionaries spreading western Christianity and the German language, Prince Rostislav of Moravia requested two bishops called Cyril and Methodius from the Eastern Orthodox Christian faith to translate parts of the New Testament bible from it’s original Greek/Arabic to the Slavic language hence the subtitle “praise God in his native language”. However, the Germans complained to the Vatican and Methodius had to go to Rome to defend this work.

The painting is about unifying different Slavic Kingdoms. In the painting the man is reading a letter from the Pope to Prince Svatopluk saying that he agrees to this (Prince Rostislav, who had since died, is at the top of the painting sitting to side of the Christian Orthodox Patriach i.e. the Patriach has the cross). Methodius who by now has been made an archbishop is in the centre of the painting in white with a beard. The four figures floating top-right signify Russia and Bulgaria (also Christian Orthodox) and the boy in shadow has a ring which reinforces the unity theme. Top-left in the dark you see Bishop Cyril defending the country from German Christianity.

The painting is set at a place called Velehrad which would be close to the current city of Zlin. It was a walled city like Vysehrad in Prague and was the then capital of Moravia. Although this was all destroyed in the middle ages, Christian pilgrims still visit the village of Velehrad to see the place where Orthodox Christianity and the Slavic New Testament Bible were introduced.

Slav Epic Painting No.4: Tsar Simeon I of Bulgaria, Dawn of Slavic Literature (1923)

This painting tells the story of the period after Archbishop Methodius died. Prince Svatopluk changed his mind, banned Orthodox Christianity and expelled any Slav that supported it. The exiles found sanctuary in Bulgaria and helped Tsar Simeon with his project for translating Byzantine texts into the Slavic language hence the subtitle, “the dawn of Slavic Literature”.

In the painting Tsar Simeon is directly in the centre in a room strewn with all kinds of documents being translated. On the wall behind him are murals of Christian Orthodox saints. The purpose of the painting is Slavic heritage connecting the past with the future.

Again it’s the unification theme. Bohemia/Moravia had already fought two wars with Hungary when in 1264 King Premysl Otakar II presided over the wedding of his niece with a Hungarian prince. Unfortunately it did not stop a third war but overall it’s striving for unity. So the painting is showing an invitation to all surrounding Slavic leaders to attend the wedding, the associated diplomacy and the forging of closer links in the Slavic lands. King Premysl Otakar II is a giant figure in the formation and rise to power of Bohemia. This is the only picture that touches on the early Premyslid dynasty. 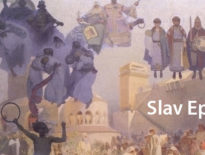 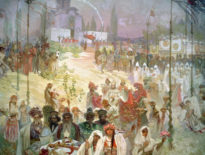